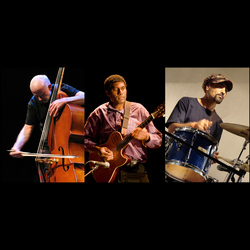 Three musicians, three stories and three styles with a common denominator: the confirmed taste for free improvisation. A mode of creation which favours the interpretation of the essence and immediate emotion, endlessly explored. Three performing musicians who haughtily ignore conventions and only follow their own disposition, constantly reveling in sparking off the spirit of experimentation. Discover a personal language, build virtual bridges leading to exchange and open the realm of possibility, that's what this concert will give us to hear. A new musical encounter bound to invigorate your senses!

Barre Phillips: double bass
Born in San Francisco, Barre Phillips settled in New York in 1962 to study classical double bass with Frederick Zimmermann. He soon became an essential figure of the avant-garde jazz scene and collaborated with Don Ellis, Archie Shepp, Eric Dolphy or Marion Brown. At that time, he met Ornette Coleman with whom he later recorded the original score for the film Naked Lunch. In 1967, he went to London where he created the band « The Trio » with saxophone player John Surman and drummer Stu Martin. His 1968 solo recording (Journal Violone in the States, issued in France as Basse Barre) is generally credited as the first solo bass record in improvised music. Based in southern France since 1972, he also composes music for films and ballet.

Camel Zekri: guitar
An innovative musician, Camel Zekri is the grandson of Hamma Moussa, grand master of the divan of Biskra in Algeria, who gave him his first musical training. With a degree in classical guitar at the Conservatoire de Paris, he then indulged in Afro-Carribean music with Dédé Saint Prix and Ralph Thamar. Equally passionate about experimental music, free jazz and contemporary music, he has a rich and atypical musical experience: he has notably collaborated with Fred Frith, Lê Quan Ninh, Daunik Lazro, Jacques Di Donato and Beñat Achiary. In 1996, he founded the "Festival de l'Eau" with Dominique Chevaucher, a project of creation along the Niger, Mouhoun, Ubangui and Senegal Rivers which led to multidisciplinary meetings between African, American, Asian and European artists.

Ahmad Compaoré: drums, percussion
Drummer, composer and rare improviser, Ahmad Compaoré is a musician of freedom. Of Egyptian and Burkinabé origins, he confirms his singular talent alongside musicians such as Fred Frith, Marc Ribot, Jamaaladeen Tacuma, Otomo Yoshihide or Egyptian choreographer Karima Mansour. Free from boundaries, he equally enjoys the most extreme experiences in experimental and improvised music, jazz and fusion. Recipient of the Culturesfrance "Hors les Murs" award in 2005 and 2008, he lived in India and Japan as part of residencies of creation. With a constant craving for exploration and discovery, he shares his creativeness between music, dance, theatre and digital art. He also teaches drums and contemporary percussion instruments through his association La Boîte à Musique in Marseilles.