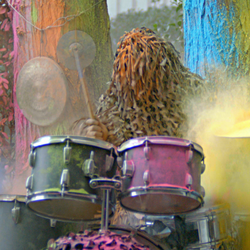 Evening as part of "Watt! Archipels", a project by Mécènes du Sud and Marseille-Provence 2013.

In 2013 as part of Watt!, a wide international project of residencies and concerts initiated by Marseille-Provence 2013, the business collective Mécènes du Sud has invited musicians from the territory to perform on an experimental mode in 5 atypical spots on their sites. This generation of artists with many influences, attuned to urban vibrations, mixes repertoires at the crossroads between hip-hop, jazz and electro-Chaabi.

For this occasion, film director Stéphane Barbato has imagined a series of 5 films made from 5 improvised musical performances, offbeat and poetic, as an unusual encounter between music and image. With his camera, he explores the codes and the core of the work environment, its whispers, its breathing, and thus evokes migration, success, crisis, competitiveness, survival... To celebrate their 10th anniversary, Mécènes du Sud have wished to gather some of the musicians involved in this ambitious project to mark their action.