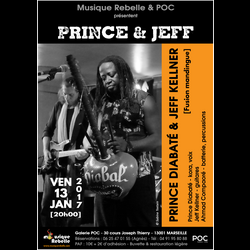 Between traditional Africa and the modernity of mixed sounds by these two artists with significant international careers, Prince Diabaté and Jeff Kellner will present the repertoire from their album "FASO" as well as new creations. In the very heart of Marseilles, a transcontinental night is brewing, thus remaining true to the melting pot of its cultures...

* Prince Diabaté
Kora player, singer and composer from Guinea Conakry, he is known as one of the pioneers of "alternative" kora thanks to a rich and singular musical background. His approach carries us into an ambiance filled with other cultures from Guinea (Fula, Susu, Baga) making a successful meeting between tradition and modernity.

* Jeff Kellner
After studying folk music, Jeff Kellner moved on to African music. He performs with Salif Keita, Toure Kunda, Tony Allen and Souad Massi whom he accompanies since 1999. Mixing several styles, he works with Bob Sinclar and produces albums with the group KYFFYZ, Guinean singer Aissata Kouyaté and CDs for children. Since 2005, he plays alongside drummer Mokhtar Samba giving many concerts in Europe and in Africa.