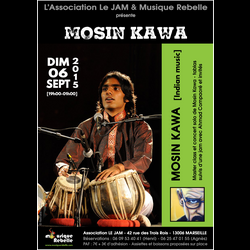 A proposal by the Association Le JAM and Musique Rebelle.

Mosin Kawa was born in 1992 in Jaipur, capital of Rajasthan in Northern India. He is the descendant of a renowned family belonging to the caste of musicians in the "Pink City", whose musical practice and knowledge are passed on from father to son for several generations. His ancestors originated from the village of Gokul Pura in Rajasthan. In those times, after the work in the fields, men often performed traditional music. Until now, they have kept this tradition and gradually became skilled artists and famed as great masters. Little by little, they left farming and breeding to settle in the famous royal city of Jaipur and practise only music at the Maharajas' court. Mosin's father, Shabbir Ahmed Hussain Kawa, became a great master of sarangi. Teacher at the Music School of Jaipur, he taught his son, from a very early age, many traditional instruments (tabla, santur, sitar and sarangi) as well as the "raga" singing.

The masterclass and solo concert will be followed by a jam session with Ahmad Compaoré and guests (free admission).

Food and drinks available on the premises.