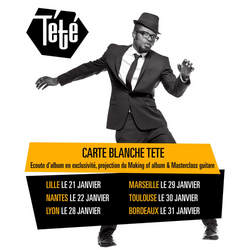 Masterclass with Tété as part of his "Carte blanche before album release".

A proposal by the label Cinq 7 in partnership with La Boîte à Musique.

As a warm up to the release of his 5th album "Nu là-bas" on 25th February and a big tour which promises to be epic, Tété starts a tour of France in 6 cities (Lille, Nantes, Lyon, Marseilles, Toulouse, Bordeaux) to make you discover his latest opus from behind the scenes. On the agenda: listening of the album with the local news media, viewing of an unreleased documentary, guitar masterclass, meeting with the fans...

The association La Boîte à Musique will be pleased to welcome Tété and 10 winner participants (professional or non-professional guitarists) who will learn to play one of his tracks.

While Tété's roots lie in the West Indies and Senegal, he's never actually lived in either of these territories. The influences of this French creole delta-folkster stem from blues, folk and pop, including Lenny Kravitz, The Beatles and Bob Dylan. Personifying the bohemian singer songwriter, Tété grew up in France from age 2, and started out playing in Parisian cafés & bars, developing his own brand of blues tainted melody driven folk before touring extensively in the USA, UK, Australia and Japan. In his spare time, the troubadour also finds time to host TV shows in France besides drawing and directing videos. 4 albums to date, a 10 years route and half a million copies later, come and meet the man live.

FEE: free admission (upon contest only)
> To register, send an e-mail to contact@derrierelesplanches.com (with object: Masterclass Marseille). The winners will be notified by mail.