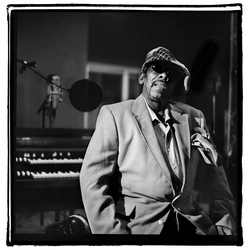 Musical maestro Lucky Peterson pays tribute to Jimmy Smith in this fantastic new show. At the start of his career, Lucky Peterson was discovered by blues star Willie Dixon when he was three years old, released his first record at five and soon after appeared on The Tonight Show. Trained by keyboardists Bill Doggett and Jimmy Smith, Peterson went on to play behind Little Milton, Bobby "Blue" Bland and Kenny Neal. His music often features the accompaniment of the Hammond B-3 organ, his favorite instrument whose warm tone refers to the songs of gospel and the hymns of soul music. Maintaining a rigorous tour schedule across the world, Lucky is a master of what has been deemed "jazz'n'blues", as in the old days of the vinyls of Blue Note. A true master of his genre, Lucky channels Jimmy Smith perfectly, paying the highest of respect to his lasting memory.