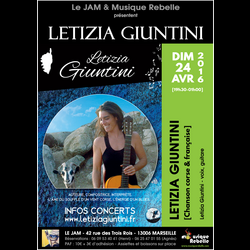 The soul of the breath of a Corsican wind, the energy of blues...

« Letizia sings like she breathes, naturally, quite simply but completely. In her voice the soul, the gravelly strength of the earth and the energy of blues, between a lament and a sheperd's song. Her songs are carved in the olive tree wood, they drink from a refreshing spring and live life to the full, its misguided ways, its rants and love always...
Singer-songwriter, Letizia Giuntini is native of Balagne in Upper-Corsica. Nurtured since her childhood by traditional singing, and particularly by the voices of A Filetta, she has performed for several years in a band of Corsican and world polyphony with which she gave many concerts throughout Europe. For some years, she has been composing her own songs, in Corsican and in French, also inspired by the spirit of rock, reggae or pop music. Songs-stories, odes to nature and to life, which she polishes with poetry and humour, a musical bridge between tradition and songwriting... »
La Maison du Chant - Marseilles

Doors open at 19:00. Food and drinks available on the premises.