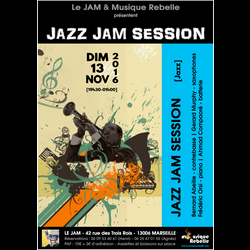 Following the success of the tribute-concert to John Coltrane, Le JAM proposes every 2nd Sunday of the month a concert by the band R.A.S (Réseau Alternative Standards) followed by a jam session around jazz.

Jazz standards are compositions widely known and widely played by jazzmen. They are also original musical compositions that every jazz musician learns in order to master his playing and phrasing. The standard is universal. A travelling musician will also feel at home without speaking the language of the country, if he can connect with local musicians through standards. Also, he will never perform the same standard in the same way all his life, without playing the same notes nor the same rhythms.

During the first set, the band R.A.S will perform standards mixing binary and ternary rhythms, around compositions by John Coltrane, Dizzy Gillespie, McCoy Tyner, Miles Davis, Sonny Rollins, etc...During the second set, the musicians or singers attending will be invited to perform on chosen themes, released on the Facebook page of the club a few days before the jam. The band R.A.S will be pleased to accompany them.

The musicians wishing to participate in the jam are invited to register (by phone or on the premises on D-day before 21:00): the entrance fee will be offered to them.

Doors open at 19:00. Food and drinks available on the premises.