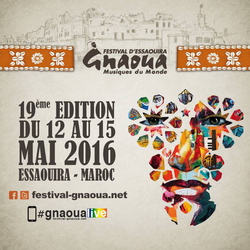 Concert as part of the 19th edition of the " Gnawa & World Music Festival" in Essaouira.

Jamaaladeen Tacuma is an American jazz and funk bass player. He showed interest in music at a young age, performing with the organist Charles Earland in his teens. In 1975, aged 19, he joined Ornette Coleman's band Prime Time. He released his first solo album "Show Stopper" in 1983. During his career, he has collaborated with such well-known artists as James Blood Ulmer, Carlos Santana or David Murray. He currently performs with the band Free Form Funky Freqs (Vernon Reid and G. Calvin Weston).

Jamaaladeen Tacuma will present a selection of his repertoire and unveil his artistic world before inviting Maâlem Hassan Boussou to join him on stage for a "jazz, funk, gnawa" fusion filled with roots and origins. A concert that promises intense moments through a colourful and emotional fusion.