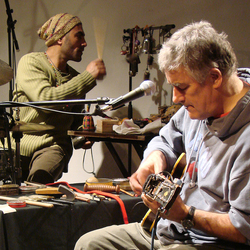 Ahmad Compaoré first met Fred Frith in July 1990 when he was chosen to work under his direction at the creation of the rock opera "Helter-Skelter", with libretto by François-Michel Pesenti. An insane project written for two sopranos, one contralto and a large electric ensemble of 12 young musicians from Marseilles, Que d'la Gueule. These six months of intensive collaboration were the occasion for the English composer to exert a long-term influence on the young drummer's future.

"Helter Skelter" was first performed in December 1990 at Theatre Toursky in Marseilles. Later the work was performed in Zagreb, Hamburg, Saint-Brieuc and Paris. The opera was recorded in February 1992 by Christian Noël at Studio Cactus in Marseilles, and mixed in July 1992 by Benedykt Grodon, Fred Frith and Jean-Marc Montera at Sound Fabrik in Munich using additional material taken from concert performances.

The Que d'la Gueule adventure ended in 1994, but to this day Ahmad Compaoré and Fred Frith continue performing together on various projects. In 2009, to end his residency of creation in Tokyo, Ahmad organised a series of concerts (SuperDeluxe, Institut Français) in which Fred Frith, Otomo Yoshihide and Seigen Ono participated. In 2017, an atypical quintet project on the initiative of guitarist Camel Zekri - gathering three guitars, one drum set and one hurdy gurdy - is created at the Musique Action festival in Nancy. The occasion for Ahmad to meet again with his mentor, ten years after their memorable duet at that same festival!

FRED FRITH: guitar, objects
Multi-instrumentalist, composer, and improviser Fred Frith has been making noise of one kind or another for almost 50 years, starting with the iconic rock collective Henry Cow, which he co-founded with Tim Hodgkinson in 1968. He is best known as a pioneering electric guitarist and improviser, songwriter, and composer for film, dance and theater. Through bands like Art Bears, Massacre, Skeleton Crew, Keep the Dog and Cosa Brava, he has stayed close to his roots in rock and folk music while branching out in many other directions. Fred Frith has worked with Meredith Monk, Derek Bailey, Chris Cutler, Joëlle Léandre, Phil Minton, Paolo Angeli, Ikue Mori and Butch Morris, to name a few.

AHMAD COMPAORÉ: drums, percussion, sampler
Of Egyptian and Burkinabé origins, Ahmad Compaoré confirms his singular talent alongside Fred Frith, Marc Ribot, Jamaaladeen Tacuma, Barre Phillips, Camel Zekri or Egyptian choreographer Karima Mansour. With a constant craving for exploration and discovery, he shares his creativeness between dance, theatre and cinema. Twice recipient of the Culturesfrance "Hors Les Murs" award, he lived in India and Japan as part of residencies of creation. Free from boundaries, he equally enjoys the most extreme experiences in alternative and improvised music, jazz and fusion. Involved in many projects, he is currently a drummer within Lucky Peterson's quartet.