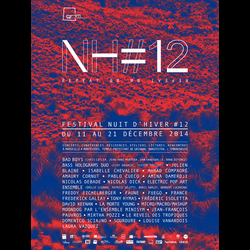 Concert as part of the "Nuit d'Hiver #12" festival.

"Four Organs" is a work for four electronic organs and maracas, written by American composer Steve Reich in 1970 in the style of minimal music. It has a distinctive appeal and perfectly illustrates his work on the phasing of sounds produced by several instrumentalists. Sustained by a continuous maraca beat serving as a rhythmic framework, the piece experiments the temporal process of increased augmentation where the repetitive patterns become longer and longer as they "expand", while creating micro-changes between the various performers.