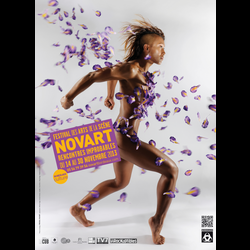 Hamid Ben Mahi, artistic director of the Novart 2013 festival, has chosen to gather several artists at the Rocher de Palmer around a focus on Algeria. "The poet like a boxer" is a space, voice and music adaptation of the eponymous collection of texts by Kateb Yacine, a communist writer not affiliated to a fixed party, both internationalist and deeply Algerian. Kheireddine Lardjam has staged this text in 2011, an additional piece to a work that combines Arabic and Western authors since 1996. Produced by his company El Ajouad, these texts sound like a nostalgic and disillusioned poetry on Algeria, but they convey also and above all a message of resistance.

This special day on Algeria will continue with an encounter anything but unlikely between Hamid Ben Mahi and the Diwan of Biskra. Coming from this Algerian town where the Bambara, Zarma, Hausa or Fula cultures are intertwined, between the Arabic world and the Black world, the diwan is the most representative ensemble from this area where all musics influence each other and merge. Initially dedicated to ritual ceremonies, the diwan has left this framework at the instigation of Camel Zekri, descending from a family that masters this tradition for decades, where sounds and spoken words blend and answer each other. He has encouraged the traditional musicians to tackle the many origins of the music they perform and also to dare the most surprising encounters like with contemporary music. This meeting with Hamid Ben Mahi will take place around the trance inherent to the ceremonial aspect of the diwan.