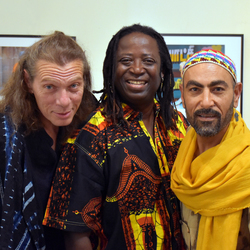 Between traditional Africa and the modernity of mixed sounds by these three artists with significant international careers, Prince Diabaté, Jeff Kellner and Ahmad Compaoré invite us to a transcontinental journey between Conakry and Marseilles, thus remaining true to the melting pot of their cultures (Guinea, France, Burkina Faso). FASO TRIO proposes a repertoire both traditional and pop, with incursions in blues and funk, sustained by a rhythmics with rock overtones.

Through the dialogue of their instruments, the musicians draw upon their diverse musical backgrounds and shared experience to produce a new brand of rootsy West-African music, multi-faceted, of universal appeal.

PRINCE DIABATÉ: kora, kamelen n'goni, voice
Born to a prominent Malinke griot family from Guinea Conakry, Prince Diabaté is a kora player, singer-songwriter and composer. He is known as one of the pioneers of "alternative" kora style thanks to a rich if unorthodox musical background. Always in search of new sounds, he draws on the rhythms of the "Wassoulou" tradition, which he adapts to his self-taught kamelen n'goni playing. His refreshing approach carries us into other cultures from Guinea (Fula, Susu, Baga) resulting in a successful meeting between modernity and Mandinka tradition.

AHMAD COMPAORÉ: drums
Of Egyptian and Burkinabé origins, Ahmad Compaoré confirms his singular talent alongside Fred Frith, Marc Ribot, Jamaaladeen Tacuma, Barre Phillips, Camel Zekri or Egyptian choreographer Karima Mansour. Twice recipient of the Culturesfrance "Hors Les Murs" award, he lived in India and Japan as part of residencies of creation. Free from boundaries, he equally enjoys the most extreme experiences in alternative and improvised music, jazz and fusion. Involved in many projects, he is currently a drummer within Lucky Peterson's quartet.