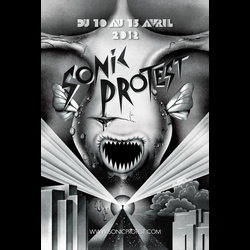 Concert as part of the "Sonic Protest" festival.

Short-lived but cult trio born in 1981 in Montpellier with Florence Berthon (ex-Low Bop), Thierry Tannières (aka Terry Den, ex-Joli Garçon) and a certain Pascal Comelade, Fall Of Saigon always had a special place in French new wave. Subtlely singular. A voice, an organ and a guitar sustained by a drum machine put very much forward, are enough to maintain a minimalist and essential structure. At the crossroads between the pop world of Young Marble Giants and the spellbinding cold ambiances of Nico ("Desertshore" period). They replay Fall of Saigon since 2011 and invite for the first time guitarist Jean-Marc Montera!