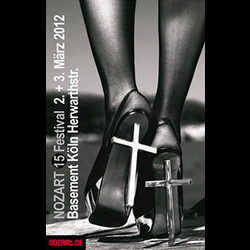 A first duo as part of the 15th edition of the "Nozart" festival.

A born improviser, guitarist and composer Jean-François Pauvros has played with musicians such as Elliot Sharp, Arto Lindsay, Jac Berrocal, Keiji Haino and Rhys Chatham... For the past 30 years, he has collaborated with avant-garde poets, film makers and choreographers. His taste for musical and human encounters, which lead him to form the most improbable and cosmopolitan groups, can only find and maintain its unity when sustained by an original and continuous inspiration.

Of Egyptian and Burkinabé origins, drummer and composer Ahmad Compaoré is a musician of freedom. A rare improviser, he confirms his singular talent alongside Fred Frith, Marc Ribot, Otomo Yoshihide, Barre Phillips or Egyptian choreographer Karima Mansour. With a constant craving for exploration and discovery, he shares his creativeness between music, dance, theatre and digital art. Free from boundaries, he equally enjoys the most extreme experiences in alternative and improvised music, jazz, fusion and world music.