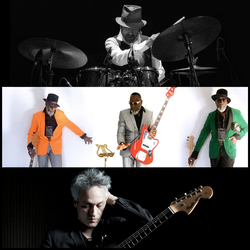 Ahmad Compaoré met Marc Ribot and Jamaaladeen Tacuma in the early 1990s during a European tour with Fred Frith. Their paths have crossed regularly since then: concerts in Spain with the band Oriental Fusion in 2003 or as a trio at the Musique Action festival in Nancy in 2008. Their collaboration continued in 2011 at the Festival Jazz des Cinq Continents in Marseilles, marked by the release of the album "Trio Compaoré".

The three musicians' artistic approach has followed a similar evolution, freeing itself from the constraints set by musical traditions in order to create an inventive style: an experimental approach born of their respective work in improvisation. « To know how to go beyond the limits of one style to play pure music », according to Ornette Coleman. Their wish to play together shows a same musical dazzling spirit, reflecting perfectly their state of mind and diversity of expression. That way, they continue to explore new territories, creating a hybrid music mixing jazz, rock and funk.

AHMAD COMPAORÉ: drums, percussion
Of Egyptian and Burkinabé origins, Ahmad Compaoré confirms his singular talent alongside Fred Frith, Marc Ribot, Jamaaladeen Tacuma, Barre Phillips, Camel Zekri or Egyptian choreographer Karima Mansour. With a constant craving for exploration and discovery, he shares his creativeness between dance, theatre and cinema. Twice recipient of the Culturesfrance "Hors Les Murs" award, he lived in India and Japan as part of residencies of creation. Involved in many projects, he is currently a drummer within Lucky Peterson's quartet.

MARC RIBOT: electric guitar
Marc Ribot is an American guitarist and composer born in New Jersey. Often regarded as a leading musician from the New-York downtown scene, ha has learnt classic guitar with Frantz Casseus. Extremely eclectic, he has performed and recorded with Tom Waits, John Zorn, Elvis Costello or The Lounge Lizards. He has also composed original scores for films and contemporary dance pieces. Marc Ribot is currently touring with his groups Spiritual Unity, Ceramic Dog and Sun Ship.

JAMAALADEEN TACUMA: electric bass
Jamaaladeen Tacuma is an American jazz and funk bass player. He showed interest in music at a young age, performing with the organist Charles Earland in his teens. In 1975, aged 19, he joined Ornette Coleman's band Prime Time. He released his first solo album "Show Stopper" in 1983. During his career, he has collaborated with such well-known artists as James Blood Ulmer, Carlos Santana or David Murray. He currently performs with the band Free Form Funky Freqs (Vernon Reid and G. Calvin Weston).