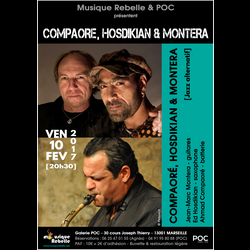 The three musicians met in the early 90s on the project "Helter Skelter", a rock opera by François-Michel Pesenti set to music by Fred Frith, and they never stopped collaborating since then. Among the various musical experiences they conduct together, experimentation plays an important part. The one proposed tonight is no exception to the rule of a full opening at the crossroads between free musical forms. A music where jazz, rock and psychedelic influences should mix with those of non-European musics while keeping its own identity.

• Jean-Marc Montera
Co-founder and artistic director of the GRIM, Jean-Marc Montera comes from the rock world. He draws on the whole range of amplified and acoustic strings, resonance, percussion, distortions, extensions and all types of diversions to evoke a world of abstract sounds. Since the 1970s, he has experienced cross-disciplinary exchanges with other artistic fields (theatre or choreographic creations, film scores). His most notable collaborations include Fred Frith, Chris Cutler, Barre Phillips, Jean-François Pauvros and Lee Ranaldo.

• Ed Hosdikian
After classical studies at the Conservatoire de Marseille, Ed Hosdikian set off to the United States where he practised jazz at the renowned Berklee School of Music. Back in France, he returned to his roots through the creation of the trio ORIENTAL FUSION in 1995 with his close friends Hakim Hamadouche and Ahmad Compaoré. Original, sensibly wild and label-free, the style of this musician is unique. As it is proven through his collaborations with Nina Simone, Jacques Higelin, Mike Stern, Fred Frith, Jamaaladeen Tacuma, among others...