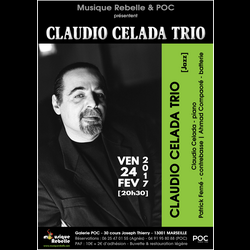 Following classical and jazz piano studies, Claudio Celada moved to Mexico in 1985 where he worked with several jazz ensembles in Mexico City and performed as an opener for « Chick Corea Electric Band ». Back in France, he settled down in Paris for three years and started teaching improvisation in jazz. In 1993, he returned to the South-East of France and collaborated to many projets with Frédéric Ménillo, Sylvain Romano, Philippe Festou, Simon Tailleu, Christophe Leloil and Christian Brazier. In 2005, he participed in the recording of "Broken Heart" with the Sylvia Versini Octet (AJMI Series), followed by "Kimpa Vita" in 2008 with the Rémi Abram Quartet. In 2009, he created a performance about the first songs by Serge Gainsbourg. Since 2013, he participes in the trio Chopin Jazz Project. His next musical adventure is the recording of an album with his own quintet.