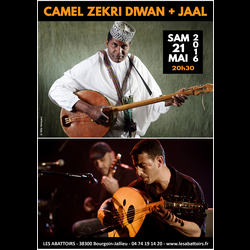 Located at the foot of the Aurès Mountains, gate of the desert, Biskra like all southern Algeria is the land of the Diwan, a ceremony practised by the Gnawas of the region. Over the years and following the mixing between the Arab, Berber and African nomadic people settled down in this area, the Diwan has evolved greatly, becoming the melting pot of a fraternal encounter between the populations, especially through music. Camel Zekri is reputed to be one of the best specialists of the Sahara music. He gathers all his knowledge and experience into the Diwan in order to carry to its highest the voice of an electric Gnawa blues of a new genre.

Alaoua Idir and Jean-Luc Frappa, the two former leaders of the band DEZORIENTAL are back with JAAL, their new musical adventure. An interlude, like a dot, a suspension caught in the air, the air precisely that blows between the two shores of the Mediterranean Sea. As if Satie and Bach had been wandering around the Maghreb, travelling trough the Middle-East as far as India and Pakistan, not forgetting New-York to finally end up in France. On stage, it is a rhythmic and colourful journey. Oud, harmonium, accordion, bass, drums and a hint of electro succeed in turns to chant the mixing, the encounter.