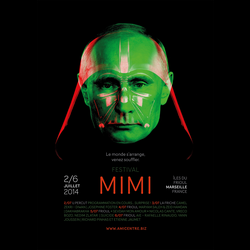 Concert as part of the 29th edition of the MIMI festival.

Innovator in music, Camel Zekri is the grandson of the great Gnawa master Hamma Moussa of Biskra in Algeria who gave him his first musical training. Today, he is one these rare enlightened conveyors able to make the connection between the depth of traditional music and the globalised expression of modern music. Enriched by nearly twenty years of actions for the survival of the Diwân's traditional custom, the artist develops an approach where experimental music - which he practises since 1995 - also has its rightful place and where modernity meets tradition. This 2014 creation promises an inspired encounter between Camel Zekri and Marseille-based drummer Ahmad Compaoré, with whom he collaborates once more to display this fusion of world music with great talent.