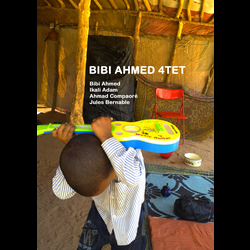 Since its opening in 2004, l'Embobineuse has invited national and worlwide artists. From Japon through New-Zealand, Australia, South Africa, Russia, North and South America or Eastern Europe, the most innovative musical trends have swept over its audiences. An adventurer by essence and a pioneer at heart, l'Embobineuse now wishes to open its programming to the North African and Central African scene, two territories where the convergence between traditional music and new technologies enables the coming up of unheard sounds.

The residency of Bibi Ahmed and Ikali Adam - Tuareg musicians from Niger, members of the band Inerane (label Sublime Frequencies) - will enable them to meet the French audience but mainly to create and record their first album under acceptable conditions, collaborating at the same time with musicians from Marseilles eager for exchange and discovery.

>>> The benefits of the evening will allow to finance the recording of the album!