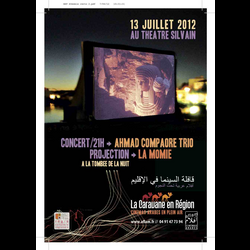 A proposal by Aflam and La Boîte à Musique.

Special evening around the Egyptian film "The Mummy" by Shadi Abdel Salam (1969).

Of Egyptian and Burkinabé origins, drummer and percussionist Ahmad Compaoré is raised in Cairo, charmed by the melodies of Oum Kalthoum and Farid El Atrache. We are in 1969, year of release of the film "The Mummy". Musician of freedom, Ahmad has developed a career just like his personal history, based upon cultural encounters. Like this city, eyes and heart looking towards the East and the West at the same time. Searching for the origin of music in his civilisation, he has always nourished himself with this double cultural descent: Pharaonic Egypt appears through percussion instruments and seize them like a new form of musical expression. Recalling poetic images, brilliantly mixing tradition, folk and spirituality. Happily uniting his roots, combining rhythmic virtuosity and refined movement, to subtly express all the emotion of this ancestral music.