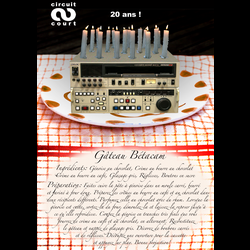 Musical performance as part of the 7th edition of the "Portes Ouvertes Consolat" festival.

This year, the association POC has imagined encounters between performing artists and exhibiting visual artists which would lead to moments of live performance during the festival. The occasion for drummer Ahmad Compaoré to share his sensibility and to create a special performance to be shown in two spots over that week-end.

As part of the evening party celebrating the 20th birthday of Circuit-Court, Ahmad Compaoré will propose a solo musical interlude (drums, percussions, objects and sampler) performed live as a soundtrack to home footage from the Cinémémoire archive collection, shot in Burkina Faso in 1955: a journey into everyday life during the French Colonies, between local handicraft, dance and theatre.