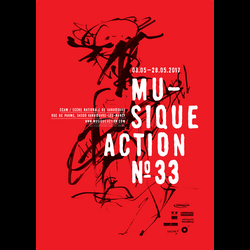 Concert as part of the 33th edition of the "Musique Action" festival.

A witness of the present time, guitarist Camel Zekri is a inheritor and conveyor of the musical art of 21st century. Composer, multi-instrumentalist, his musical career is set between life and conscience, writing and orality, oblivion and memory of oblivion... His sense for sharing has brought him here to gather four musicians with whom he had already performed separately: guitarist and composer Fred Frith (member of Art Bears, Massacre, Keep the Dog, Cosa Brava, among others), drummer and percussionnist Ahmad Compaoré (playing partner of Marc Ribot, Fred Frith or Barre Phillips), Gilles Laval, personnalité à part of the French musicale scene (member of Le Miroir & le Marteau, PFL Traject) and finally Romain Baudoin (founding member of the radical musical band ARTÚS). This original quintet proposes some kind of modal hallucination where the guitar becomes the medium between the musical culture of the South and the North. An exchange with constant poetic flow.