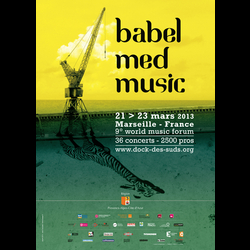 Concert as part of the 9th edition of the "Babel Med Music" forum.

A production by Marseille-Provence 2013 - European Capital of Culture, in coproduction with the Théâtre du Bois de l'Aune - Artistic and cultural centre of the Pays d'Aix community. With the support of Institut Français d'Egypte and Mama Shelter.

WATT! amplifies the sound and musical echoes of a Mediterranean youth in turmoil, connected to the web and new music, hip hop leading the way. Five itinerant artistic residencies took the pulse of the capital cities of rap and new independent places in the Arab world where, from Cairo to Tunis, the artists become the spokespersons of the people's aspirations for freedom. Following scenic residencies on the Marseille-Provence territory, these five creations are gathered at the Dock des Suds for 3 nights during Babel Med Music. Besides the concerts: footage of sessions in unusual places, mixtape, meetings, showcases and presentation of the project making-of by journalist Hind Meddeb (Tracks, Arte).

The creation Zamalek represents the fusion between today's music (hip hop, electro-Chaabi) and oriental traditional music. Resulting from various influences, the repertoire is sustained by the urban voices of Egyptian rappers, messengers of the sounds of the revolution. Through these new forms of expression, Zamalek emphasizes this primary aspiration of Arab music: in a dynamics of creation and rebellion, ethnic rhythms and Arab-Andalusian jazz sounds echo a new generation longing for freedom.